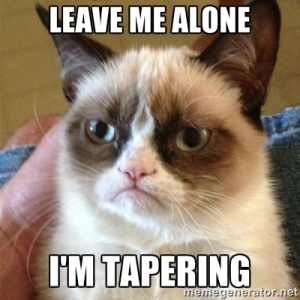 Yes, it’s taper time for me, and I find myself stagnating.  I feel kinda lazy, kinda not motivated, kinda blah… It’s weird how that works as running is not one of my most favorite things to do, but I have a goal and I feel like I’m not actively working towards my goal as I can only do so much for the next 7 days.  So what does a person who is tapering think about?  Their NEXT race, of course, and how to improve their time and fitness!!  And bread.  Freshly baked bread hot out of the oven with butter on top… OMG… that sounds heavenly.  Blame James for that last image… he’s the one who started talking about fresh baked bread which is a no-no in our house while we’re training (per me, not him).

But hey, as I’m on the subject of bread, I thought I would give an update on my weight loss.  I hit a very nasty plateau back in July.  I had lost 8 pounds or so and couldn’t get the scale to budge at all for half of June and all of July, but I managed to make it move again at the beginning of August.  A 6-week plateau is enough to kill anyone, but persistence and consistency was the key, and I never gave up.  I have now lost over 18 pounds in total.  I am meticulous about logging my food in MyFitnessPal, and, the biggie, I think my metabolism has kicked into high gear with all this silly running I’m doing.  Eh.  Just a small side note.  That’s also 18 pounds I don’t have to carry around during my race.

Okay, so one thing I do when I’m not running… I read about running.  We do subscribe to Runner’s World magazine, and we fight over who gets to read the latest issue first (this is getting to be an obsession, isn’t it), but I was playing online today and I came across an article in Runner’s World online, “How Many Miles A Week Should I Run?”  If you check this article out, never mind the beginning blah-blah-blah part… skip down to the bottom where the charts are. For “mortal” people (meaning the non-elite) that are running a half-marathon, mileage should be about 30 to 40 miles per week.  Ouch.  I run between 16 to 20.

Does this mean I’m going to fail next week?  Noooo, of course not.  As I’ve said, if I have to crawl across the finish line, I will get that bling.  But this information gives me something more to strive for (and I don’t care that I ended my sentence in a preposition).  I have the Maui half coming up in January, so I can aim for 20 to 25 miles per week during that training cycle, then after that will be Kansas which I’ll aim for 25 to 30 miles per week.  Ahhh, see the slow progression?  One day, I’m going to run a half in 2 hours… maybe next year, maybe the year after, but I will never stop trying.  And don’t ever tell me that I can’t, because I can guarantee you one day I will.