I’m kind of in the mood to babble about nothing in particular, so I’m linking up with Amanda from Running With Spoons for TOLT.  Thanks Amanda for the creative outlet!!

1.  Winter Munchies.  Ella at Instinctive Fails talks about how animals fatten themselves up for the winter, so maybe humans do too?  I’ve decided I’m going to adopt that theory to explain my winter weight gain.  Think about it… our ancestors probably did have to bulk up to stay warm in the winter just as animals do.  So it would make perfect sense that our bodies instinctively store fat for the winter.  Well, it sounds good anyway. It has absolutely nothing to do with the extra cookies or fudge or egg nog that I treat myself to during the holidays… it’s really just pure instinct.  Necessary for survival.  During the holidays. 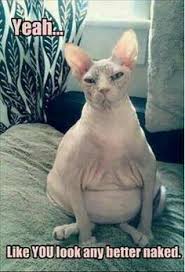 2.  Pinterest.  Yes, I’m older and not so social media savvy, but I just don’t get it!  I want to understand it, I really do, but right now I just can’t wrap my head around it.  What is the purpose?  What does one do on Pinterest?  It sounds like something Microsoft came up with before it released Windows 8 so everyone could get used to the idea of “pinning” things.  Or did Microsoft copy Pinterest?  Ooooo, conspiracy theory perhaps?  I should probably consult my 11-year-old and figure out how to use Pinterest.  No, actually, I think I need to watch a YouTube video on the ins and outs of Pinterest.  Is there a book out there called Pinterest for Dummies?

3.  I’ve noticed quite a few people have created the illusion of snow falling on their blogs.  May I just say this is a super cool feature!  I would love to have snow falling all over my blog during the holidays and winter months.  But why didn’t I get the memo on how to make the snow fall?  Can anyone tell me how this is done?

4.  And speaking of snow falling, I hope no one is trying to get to Seattle via I-90.  I’m of the understanding that parts of the pass are closed.  For weeks I heard how mild our winter was going to be because we had such a hot summer and El Nino is going to last until 2016, blah, blah, blah, but noooo, we’ve had one storm system after another come in and practically drown us.  Did you hear that the governor of Washington has declared a state of emergency because of all our rain?  We haven’t got snow where I live, only rain (#thankful), but it makes for some pretty awful training runs, whether they’re on the trail or on the treadmill.  I’m so sick of running on the treadmill.  Ugh.  Ohhh wellll… suck it up, buttercup. You’ve still got a few weeks of training left.

5.  Meep.  He’s a cat.  To the Nth degree.  I don’t have much to say about him other than I really just wanted to share some silly pictures of him that I’ve taken recently.  (shameless plug, I know) 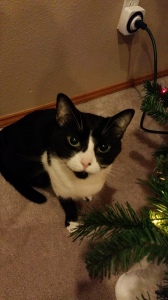 Step awayyy from the tree… 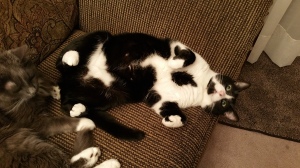 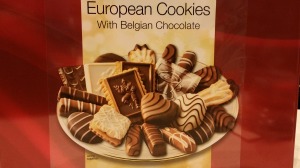 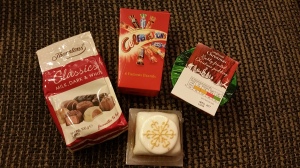 6.  And finally, the above is just a small sampling of how I’ve been preparing myself for winter survival.  And the holidays.  Yeah, I’m definitely going to say it’s total instinct.

I’ve babbled enough for today.  Do you have anything to babble about?  How does your body prepare for survival through the winter?  Got snow?  On your blog?  Got a cat that you love to mess with?

29 thoughts on “Thinking Out Loud Thursday”