I think it’s been awhile since I’ve written anything… I’ve been enjoying getting caught up with all of you so much, I forgot I should probably write something too!

I was finally able to hit my beloved trail again last Saturday for my long-ish run (“-ish” as it’s only the first week of training). The trail definitely looks a bit different in the winter!  But now you can kind of see how tall and skinny the trees are and why I freak out so much when it’s windy. Because things are so bare, I actually discovered a house that I didn’t know was there before. (No, I didn’t take a picture of it, :D) 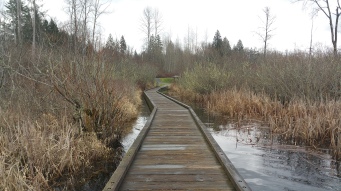 About 3 miles up is a walkway out to a hidden treasure, Lake Cassidy.  People fish in this lake, but I can guarantee you I wouldn’t be eating anything that comes out of it.  I see what floats around in that lake… it’s disgusting.  To be honest, I wouldn’t even swim in it… which people do as well. Regardless, it’s nice to have and is gorgeous to look at and so peaceful, especially during the summer.

I’ve thankfully been hitting all my runs, including my streak runs.  I’ve been streaking for 34 days now, and my total mileage since starting is about 70.  Well… hmmm… that number should improve as I amp up my training mileage.  By the end of February, I’ll be at my peak, so it’ll be interesting to compare the numbers month to month (my next race is March 5th).  But then I’ll have 2 weeks of recovery in March again, just like I did in January, so my numbers will be low in March too. Such a vicious circle, haha. 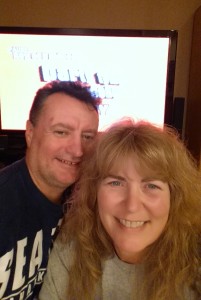 James and I had our celebratory karaoke night last Saturday.  We’ve decided to have one of those every time we finish a race.  We can’t do it while we’re training as the *drinking* part of it tends to interfere, but when we’re in recovery mode, look out!  Turn up that music and turn on the mic!  It’s time to get footloose and fancy free!  Our child even got involved and decided he wanted to sing too!  I’m a proud mama!  Especially as he was tackling some tough ones that I had no idea what they were!  Yep, super proud mama!

Anyone besides me love to karaoke?  Go ahead… ‘fess up!  You’re amongst friends!!

Have a great rest of your week!

39 thoughts on “Month One Down”