I did something totally out of character for me last night… for Meatless Monday, I actually cooked!  And something other than spaghetti squash!

I’ve been following some fabulous recipe blogs, and boy, am I ever inspired!  So many of you are just fabulous with ingredients, and seasonings, and cooking, and baking, and… well… just wow! I thought it would be kind of fun to see if I could come up with a new and tasty dinner for James and I to try from your recipes even though the kitchen and I just don’t get along.

I was planning on making Lynz Real Cooking’s Traditional Falafal recipe.  However… it kind of worried me that I didn’t have a meat grinder.  I’ve never had falafal before, and I think I’d like to taste it first before I go and botch it all up as it looks like something I really, really, really want to like!

So I searched her recipe archives and found Zucchini Pie!  Perfect!  I knew what all the ingredients were (sometimes this is a serious challenge for me) and I knew what you were supposed to do in each step, so I gave it a whirl! Voila! 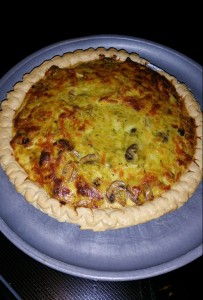 The only thing I did different was I added mushrooms, and I did keep the mozzarella cheese in it as well (she gives you the option to leave it out).  I did have to use a ready-made frozen pie crust because the only thing I can roll out is Play-Dough, but the entire dish was fabulous!  This is definitely a keeper!  Great recipe, Lynn!  Thank you so much for your inspiration! 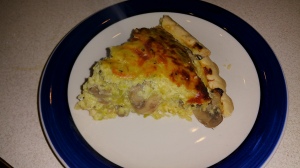 But I didn’t stop there!!  Months ago when I first saw this brownie recipe I wanted to make it for my son as he loves brownies so much.  Again, I suck in the kitchen, so I put it off for a long, long time.  Until now.  Say hello to Lynz Real Cooking’s Mint Cookie Brownies! 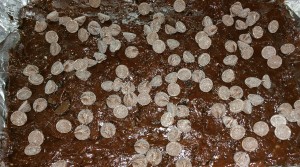 Before I baked the brownies, I added chocolate chips to the top because, well… the more chocolate the better, amiright?! 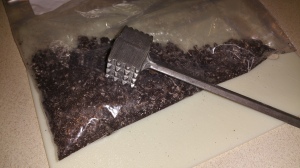 Smashing those cookies was great for the soul!! I had actually gotten some Mint Oreo’s, but the boys ate them before I got to use them, so I used some other chocolate mint cookies instead. They were still fun to smash! 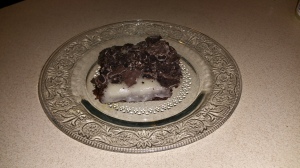 And there you have it!  Wonderful Mint Cookie Brownies via Lynz Real Cooking!  My husband and I loved the Zucchini Pie (sorry, Lynn, can’t convince the child to even try it, haha), and all three of us adored the brownies!  And if I can make these recipes, then anyone can do it!  Again, a big thank you to Lynn for both of these recipes!!