As I was pondering the plight of… (oooo, alliteration)…

As I was pondering the plight of my pained patella (hehe), I started thinking about the ’80s and ’90s when I was in the best shape of my life and how I never would have had such a ridiculous injury, or pain.  (Don’t even go there with the age thing… even if it was 25 years ago). So, I was thinking to myself, hmmm, what was it I did differently back then that I don’t do now?! And then I realized… it has to be all those awesome VHS workout tapes I did religiously.  (For the young ‘uns reading this, VHS tapes were what we… cultured… people used to watch movies on before DVDs or streaming).

So I went on a treasure hunt in my garage.  Hey!  Looky what I found!  A whole slew of old tapes I used to work out to!  Anyone care to take a trip down memory lane with me?

Kathy Smith’s Fat Burning Workout — I loved this one.  I plopped it in the VCR no less than 3 times a week. This is probably one of the first HIIT workout tapes out there, which isn’t surprising as Kathy Smith is the fitness guru of the ’80s and ’90s (well, her and Jane Fonda, but we’re not talking about Jane right now).  Lots of lunges and squats (see, focused on knee and hip strength… she knew what she was doing).

Then there was Donna Richardson.  Boy was she ever spunky!  Loved her too, and I did this one (which came out in 1994) whenever I needed a change up from Kathy. 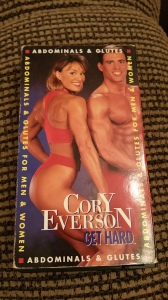 For years, I combined my aerobics with lifting weights, so I would buy Muscle and Fitness Magazine.  Anyone remember Cory Everson?  She was a champion weightlifter (Ms. Olympia, Arnold’s female counterpart), and she even had a role in Jean-Claude Van Damme’s movie, Double Impact.  Anyway, she was smart and got on the workout video bandwagon.  I lifted weights so I had to get it (1992).  I did this tape at least 3 times a week as well.  Cory Everson – Get Hard… the title says it all. 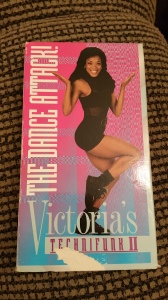 I can’t leave out Victoria Johnson!  Holy dancer Batman!  I wanted to groove just like her!  In her Technifunk tape, she made a fun go of all those fabulous ’90s dances… like the Cabbage Patch, the Running Man, Ho Hey, etc.  Great practice for going out clubbing! 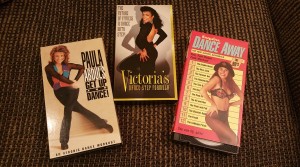 I have about 10 or 15 more tapes out in the garage, but I think I’m seeing a pattern here… I need to get back to basics with my ’80s and ’90s VHS workout tapes, get that knee back in shape, then see how far that gets me down the trail! Woo hoo!  I’m excited!!  Now then… anyone got a VCR I can borrow?  Anyone?  Anyone at all?

46 thoughts on “Blast From The Past”