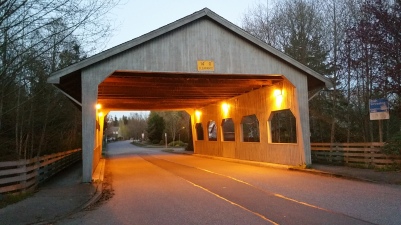 It’s Sunday night and I’m sitting here craving a chocolate moon pie (;D).  Does anybody else like them, or is it just me?  In my younger years, I would stay with my grandmother during the summer in Bountiful, Utah, hang out at the pool, and after every swim session, I ate a chocolate moon pie. Maybe I just need to go swimming.  Or maybe the weather has been so nice here in the Pacific Northwest that it makes me think of summertime.  But the real answer is probably because I just read a post that mentioned them.

Speaking of weather, it really has been gorgeous.  Today was 70 degrees and sunny.  That is indeed summer weather… for these parts anyway.  And I completed my long run right in the peak of it.  But funny enough, never once did I feel overheated.  Okay, well, I took a break after mile 5, ran back by the house, cooled myself down with a wet paper towel and got some ice water, but still, it wasn’t horrible to be out running in the middle of the day. 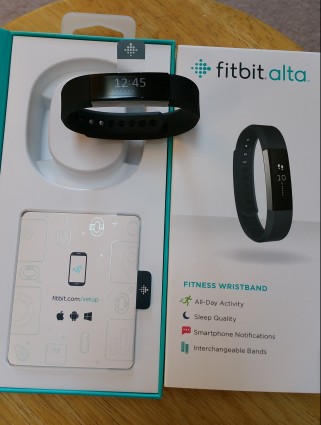 James and I hit up the REI sale yesterday (it’s a sports store), and he bought me a sweet little FitBit (he got himself the Garmin 235 watch and a Nathan Fireball Race Vest, so he didn’t go without).   Just a new fun little toy with more charts, graphs, and apps!

As you can see from above, I was loaded for bear when I went for my run today.  I had my Garmin Vivoactive to track and map my run, my FitBit to track every movement that I made including the steps, and my magnetic bracelet for balance that I don’t go on a run without.  Overkill? Haha, perhaps… but when you’re a numbers and stats geek, which a lot of runners are, then it’s “the more the merrier.” 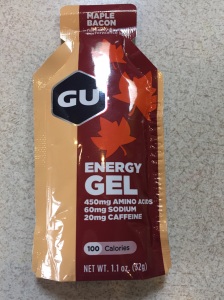 We also picked up a couple of Maple Bacon flavored GU gels from REI.  Fantastic!  Have you tried this flavor yet?  I had mine at about mile 5 when I was a touch hungry.  I found that after I ate some of the gel then licked my lips, I had added salt flavor!  Just like real bacon!  (I know some you may be quite grossed out by this… sorry!  #runnerslife) 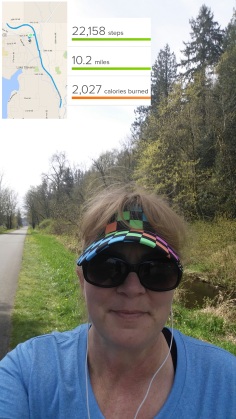 And above was my final long run before Salt Lake City on April 16.  See how I did that in the picture?  Map from the Garmin, stats from the FitBit.  There’s something appealing about seeing 22,000 as opposed to 10 (size matters?).  Calories burned were over 2000… I totally have room in my diet today for a moon pie.

It’s almost Monday already so it’s time for Jamesy’s Motivational Music Monday!  His particular choice this week has prompted me to post this one… an oldie but a goodie!  It still puts a spring in my step! I find it kind of funny that a lot of videos don’t match the meaning of the song whatsoever… ever notice that?!

Hope you have a wonderful week!  The rain returns tomorrow for us, but I am so very thankful for the beautiful sunshine we have had just recently!!

38 thoughts on “More This and That”