I’m not that great at giving a race recap, so if you want the full 4-11 (do people still say that?), you might want to check out Jamesy’s blog for his race recap later in the week.  In the meantime, I’ll give a brief summary of the weekend from my perspective. 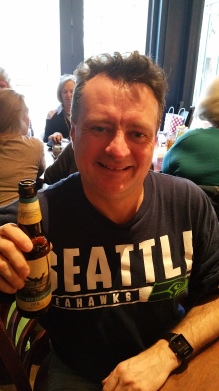 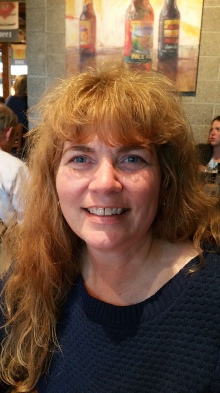 If you caught my pre-race freak-out post, you’ll know that we had an extremely bumpy flight thanks to a snow storm.  This is us on Thursday not long after that incident… celebrating being alive.

You might have also caught the part where I met up with some family on Friday where we toured Temple Square.  A bit of history: My father graduated from Bountiful High School around 1947, so my family “base” is in Utah.  I hadn’t been to Temple Square since before my grandmother died in 1981, and it was great to be there.  When I was a kid, my sister and I would spend most summers with her in Bountiful.  Utah was as much home to me as Arizona was.

The above was the morning of the race.  The bright lights in the middle represent the start line. And it was cold.  Luckily, James and I had brought a couple of space blankets from a previous Rock ‘n’ Roll event, so we didn’t freeze too much.  Starting temperature was 38 degrees F.

The elevation of the course looked like this.  While, yes, there is a huge downhill section, there were very painful uphill parts as well.  Four of the most notable hills were two in mile 1 (not nice), the one from mile 5 to mile 6 (total energy suck), and a complete ass kicker in mile 7 that was comparable to my Mo-Fo Hill across the street.  The marathon and half-marathon runners split up at mile 9, and when James made his turnoff, he went straight uphill yet again; thankfully, I went down.  Not only that, we train at sea level, and I’m seeing that this course was between 4300 to 4800 feet.  It took a little bit of breathing effort to go up those hills.  By the 12th mile, I was knackered.  I wasn’t hurt in any shape or form and my feet were fine, no blisters (yay Brooks!), but I was indeed tired.  The finish line was such a sweet sight!

Post-race festivities were fabulous.  Pancakes with boysenberry syrup.  Creamsicles.  Yogurt. Beer.  Music.  They did not, however, have chocolate milk, so we headed to the nearest coffee shop afterwards to get some hot chocolate.  It was still cold, but I was thankful for not getting overheated.

It was a fabulous weekend and a fabulous race.  I’m not hurt, so training begins right away for our next adventure… Rock ‘N’ Roll Seattle in just a mere 60 days!  And we are completely primed for that lovely hilly course!  I have a beautiful set of rolling hills I’ll be training on to get my quads in shape for it, not to mention I’m going to attempt Mo-Fo Hill a couple more times.

Meanwhile, the karaoke celebratory night is this coming Saturday.  Maybe I’ll set up the GoPro and get some random video…. hahahaha, not!  Have a great week!