The flu bug in my house is thankfully all gone now.  James got lucky… he was not affected.  He thinks it has something to do with having gotten the flu shot.  I don’t believe that for an instant. I think he avoided the flu because he’s meticulous about washing his hands and using hand sanitizer (inside joke because I don’t believe in getting the flu shot). Regardless, we are once again a healthy and happy family!  I’ll be spending the next week bleaching and sanitizing everything we’ve ever touched.  Yay.

Tuesday was Jamesy’s birthday!  Even though AJ and I had some resemblance of an illness, we still managed to give James a nice, happy evening!  I actually made some home-made cupcakes… with frosting!  And I even made some type of chicken parmesan dinner for him that he really enjoyed.  The secret was in the frying of the chicken pieces… I went full fat and full flavor for this baby!!  Bread crumbs, egg, and milk for dipping, and good old fashioned vegetable oil for frying!!  No oven baking… no boring panko crumbs… full flavor all the way!  (I am such a rebellious soul, hehe)  No worries… we went back to healthy on Wednesday (well, at least until Friday Happy Hour, :D). 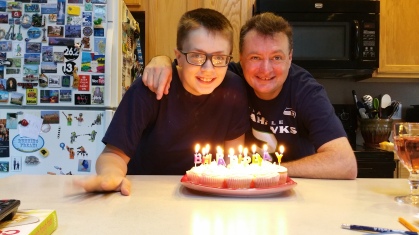 Speaking of healthy, we got a new little toy… the Nutribullet by Magic Bullet!  We’ve always made our shakes and smoothies in the Magic Bullet, but the motor started to die, so enter the Nutribullet!  Much bigger than a Magic Bullet… kind of like a full size blender and super powerful.  You can make 2 servings in one go, and not near as klunky to wash as a blender.  We just love our little gadgets.

Can’t leave out the recipe book it came with, with lots of healthy smoothies to create! 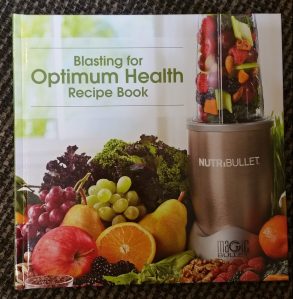 As for work, it’s been a week!  Fawns being born, ducklings losing their mothers, bunny nests being uncovered, fledgling birds that really don’t need to be rescued… it’s just crazy.  Some of you may not be aware, but I work at a rescue and rehab for wild animals.  A couple of tips if you run across a wild baby animal: 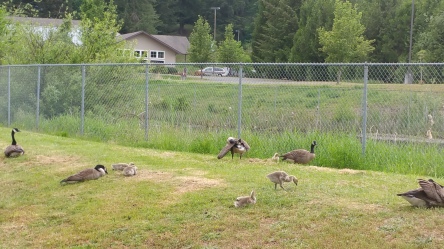 Geese will foster orphaned goslings. Ducks will kill ducklings that are not their own.

As for this guy below, he was afraid to come down out of a tree because of a nearby barking dog.  A citizen thought he was stuck.  He was “freed” from this position and still wouldn’t come down. But once the dog was quieted and no one was around, he came down on his own accord. (If you’re unable to make out what it is… it’s a raccoon, and a very healthy one at that!) 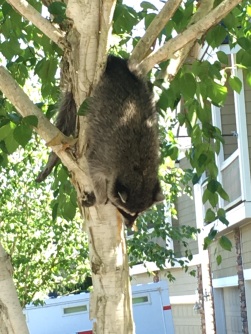 I am now about to attempt my first 3-mile run after a 2-week break.  As long as I don’t cough up a lung in the process, I’ll be good to go.  After all, my next half is only a month away.  Holy crap.

Have a great week!!