I’m feeling quite overwhelmed at the moment so I haven’t been posting as regularly as I would like, but hey, life gets in the way of our blogging sometimes, doesn’t it.

Thank you to everyone with your kind thoughts for my mother.  She’s still very weak, but she’s a tough old gal and I’m sure will be fine in a week or so.  She still refuses to go to the doctor, but I am accepting and respecting her wishes.  (As if I have a choice, hehe).  So… moving on… 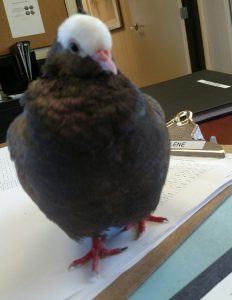 Work:  A lovely little Mookee pigeon was brought to the facility this past week.  Mookees are actually domestic show pigeons originating from India.  Apparently this little guy was abandoned (dumped) and was just wandering around a construction site.  I’m so relieved that the people recognized him as an “out of place” pet and cared enough to want to save him.  He is such a sweetie.  I love him; I want to keep him.  He sits on my shoulder, coos in my ear, and gives me gentle pecks on the cheek.  I just love my job.

Oh, also, this was found hanging on a bush… not a tree, a bush:

Can you tell what it is?  It’s a hornet’s nest!!  A big, huge, ginormous hornet’s nest!  Bigger than a basketball!  I had actually never seen one that big before, so I’m sure you can imagine the words that came out of my mouth.  James suggested we get a stick.  Ummm…. no.  But it is gone now, poor things.  If only they’d chosen a better place to build.

The 12th Man:  The American football season began last week, so I may throw some “Go ‘Hawks” in there every now and again to cheer on our beloved Seattle Seahawks.  As I live it, I don’t think much about it, but not everyone knows about The 12th Man.  The 12th man is actually considered to be the fans for 11-man sports teams.  In 1984, the Seattle Seahawks retired the #12 jersey in honor of their fans.  In 2003, they installed a huge flagpole at Century Link Field and started raising a giant flag with the number 12 on it to honor the fans.  This is when the earth moves in Seattle… literally.  You may see a lot of 12s on this site in the upcoming months as we Seattle fans take our job seriously. You can’t go anywhere in the Pacific Northwest without seeing a 12, including the Space Needle.  So in case you are wondering about the significance of the 12, there you have it!

Training:  Why, yes, I am, thank you.  Bellingham Bay race next weekend already.  My how time flies.  I don’t think I even put it on my sidebar.  At this point, I may just add my Tulsa race for November and be done with it, lol.

Motivational Music Monday:  Okay, so this is the real reason I’m here right now!  James posted a cool little ditty in honor of the opening week of football.  It’s the song that the Seahawks take the field to (yes, I dangled my participle and ended in a preposition, :D).  Anyway, to stick with his little theme…. nahhh…. I’m just going to stick to a common word… symphony. Or more specific, “Symphony of Destruction” by “Megadeth.”  Ohhh yeahhh… I do crunch too.

And that’s going to do it for me today!  I hope you all have a wonderful weekend!