Rob over at My God, My Music, My Life, has put forth the challenge to find some stories that are different from the usual doom and gloom we’re too used to seeing in the daily news.  And I’m always up for a happy story.  It is my hope that people one day realize that hate does not change things… if you want things to be different, start from within.

Joe Bartley, an 89-year-old widower in Paignton, Devon, placed an ad in a local newspaper looking for work to “save him from dying of boredom.”  The ad went global and landed him a new job at a local cafe.

Joe retired from his last job as a college cleaner 6 years ago.  He had previously served as a wireless operator with the 6th Airborne Divisional Signals in Palenstine after the war.  Once word got out about the ad, he was inundated with job offers.  He had never had a job interview before and was “over the moon” about acing his first one.

Joe hopes to work around 20 hours a week waiting, cleaning, and preparing veggies at the cafe near his home.  He is even keen on a bit of overtime.  One female customer, who is 75, said: “I’m looking forward to seeing him – I’ve just given him a kiss.  He is a dear old boy.”

So sweet!  Perhaps he will find love again too… 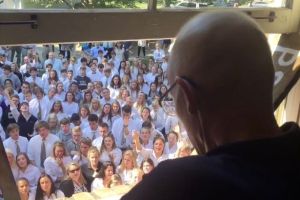 Ben Ellis, a high school teacher who was battling cancer, was so loved by his students they turned up in droves to sing to him outside his home.  He was left fighting back tears at the window of his bedroom as 400 children serenaded him with song of worship, Holy Spirit You are Welcome Here.

The entire student body from the Nashville area high school where he taught, including parents and faculty, loaded up buses and cars to worship with him at his home.  Ellis lost his battle with cancer just 10 days later.

Second grade students at a school in Topeka, KS, had just finished reading a book about some kids who find a stranded sheepdog with a broken leg, when the teacher happened upon a Facebook post from the Helping Hands Humane Society that she knew the kids would love.  The post was about an Australian shepherd that had been taken to the shelter after a local vet found him on the side of the road with a broken leg.

The HHHS were asking for donations for $400 to pay for the surgery needed for Ryker.  The 2nd-grade students were compelled to help Ryker in any way possible, so the teacher sent a note home to their parents.

They came back the next day and the kids had raised over $450.  The shelter was thrilled and knew it had to do something to thank these sweet children.  So the shelter and Ryker headed off to the school with the intention of surprising the 2nd-grade class, and they didn’t disappoint.

“The kids’ faces were priceless,” said the teacher.  “They all got to get a picture with him… and the shelter was nice enough to make little prints of Ryker’s paws.”

The shelter says it has received over 100 applications from families hoping to adopt him. 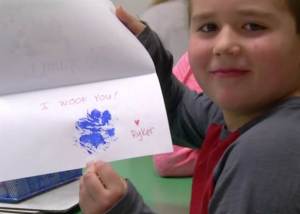 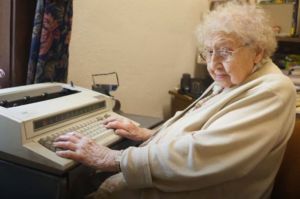 A woman celebrating her 80th anniversary in the same job says that retirement isn’t in the cards – as she still loves her work.

Elisabeth Davis may be 99 years old, but she’s not letting a little thing like age get in the way of keeping active and entertained as she heads to the offices of Culver Academies every day in her role as secretary and says that she has always been happy at the job.

After she left Culver High School as a student in 1935, Elisabeth took her first job as assistant to the dean in Culver Academies and has been there ever since.  She still uses a typewriter to get the job done, with the school ordering ribbon and parts specially. 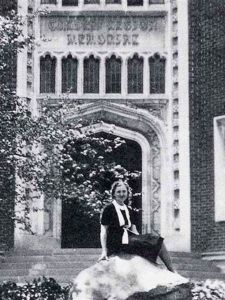 In 1936 when Elisabeth started at Culver Academies:

Elisabeth says:  “I just live day by day.  If there comes a time when I feel like it, I will, but I don’t feel like retiring.”