… for Motivational Music Monday, that is!  Sheesh, what were you thinking?!

But first, a small update… 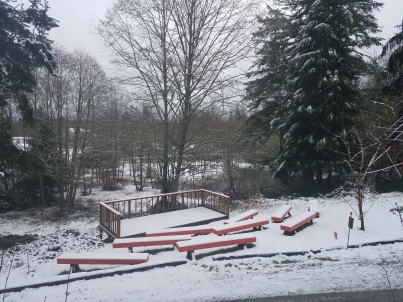 And this happened the Monday before that:

I’m really kind of done with winter.  Even our red-tailed hawk at work has been none too impressed… she’s looking a bit cranky these days:

However… cold weather and all, James kicked ass at his race last weekend; the sun even came out for a couple of hours while he ran (he was so lucky to have sun)!  It seems I barely had enough time to get to the finish line before he crossed.  I see him work incredibly hard to get his speed up, and while he didn’t PR, he was close to it.  He’s not convinced he’ll PR in Reno because of the course and elevation (Reno is where our next big race is), but I disagree with him.  I think he has a good chance in spite of the course and elevation. 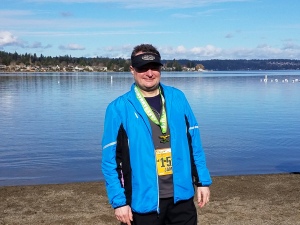 All that being said, I am familiar with only two of their songs, the following being my favorite. This is one that has stood the test of time for me, so it ranks way up there.  It has a constant beat so it’s super great to run to.  If you don’t know it, take a listen.  You may have just found your new favorite song to run to.

We’re heading to a new area for long-run Sunday and hoping to meet up with a fellow blogger. I will let you know how/if that goes.  Regardless… we’re going to have new territory and a new trail to explore.  I’m actually looking forward to it, because it won’t be snowing!! Happy Sunday my friends!