Baby season is in full swing at the rescue and rehab center.  Things are kicking off a bit late this year because of our cold winter and cold spring.  But the cold ain’t gonna stop Mother Nature now, is it!  We currently have abandoned baby squirrels, abandoned baby bunnies, baby opossums who’ve lost their mom, even 2 little owlets being raised by our resident foster owl mama… and I just received my very first fawn call of the season today.  (“There is a fawn sitting in my yard that has been abandoned.” “No, it hasn’t been abandoned.  Please leave it alone.”) 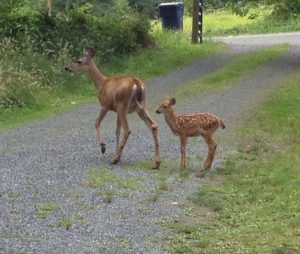 That being said, I also received a call today that sent my blood pressure to stroke level.  If I could’ve gone through the phone to slap some sense into this a-hole, I would have:

HIM:  My dogs were in a fight with a raccoon a couple of days ago and they chased it up a tree. It’s been up there for 2 days and I would like it removed before it dies.

ME:  The raccoon is in the tree because he’s afraid of your dogs.  Where are the dogs now?

HIM:  Barking at the raccoon in the tree.

ME:  Can you place the dogs in their kennel?

HIM:  The kennel is right underneath the tree.  Should I put them in there?

ME:  No.  Can you bring the dogs inside for a few hours?

ME:  Can you put them in the garage to give this raccoon a chance to come down out of the tree?

I had to put him on hold after that answer.

Are you f’n kidding me?!  I was so not prepared for that response.  You can’t lock up your dogs?? To let another living being, one of God’s creatures, who is scared to death, come down out of a tree and have a chance at survival?? Then why the f*** did you call me?!!  Do you really think I’m going to track all the way out to your drug-infested meth-lab ‘home’ and remove a raccoon from a tree when you won’t even put your hell hounds up??

I was now done with this phone call.  I had to pass it off to my director as the veins in my head were frantically pulsating.

The director then proceeded to calmly explain the risk of diseases that a dead raccoon would pass onto his beloved outside dogs who were never allowed inside, if he didn’t remove his dogs from the area to let the raccoon down.

Alas… we will never know what happened to this poor raccoon, whether the above idiot decided to put his dogs up for a couple of hours or not.

Baby season is upon us.  Time for me to step up my game and get ahead of all that’s about to come… 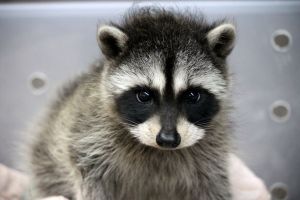 31 thoughts on “Just Another Day”