May is a busy month in this house.  This past week we’ve celebrated a birthday and Mother’s Day (and we still have an anniversary coming up).  We also did a happy dance when the child returned home from Hawaii.  AJ is the one buried in the sand (his father did his laundry, 😀 ).

The day before AJ came home was James’s birthday.  I bought him… (notice I said him, not us)… I bought him a nice dinner and dessert on his birthday, and when AJ got home, we celebrated properly.

It’s Sunday night, so I’m on day 12 of The Whole 30.  All of my cravings stopped on day 6.  I wasn’t even tempted with cake or naughtiness even with all the celebrations going on.  I will admit, as I hate cooking, I’m a bit tired of spending time in the kitchen, but again, it’s all in the planning.  I made enough food on Thursday and Friday to last me the weekend, and the boys were on their own.  Mostly.  I’ll always share my veggies and chili.  (#spottedtheGroot)

I also did my long run today.  It went well.  I felt strong and full of energy.  At mile 4, I ate a few too many raisins (portion control matters) and my stomach cramped up; however, as I was doing an out-and-back, I had no choice but to power through.  Sometimes not having a choice is a good thing.  I also had the trail mostly to myself.  Nice.

Although… sometimes being on the trail alone can wreak havoc with the imagination.  I wore my hydration pack, kept hearing the sloshing of water, and thought someone or someTHING was stalking me as it sounded like the bushes rustling.  I don’t have a clue what bedded down in this huge patch of grass the previous night, but I’m glad it was gone (the grass is actually as high as my hips).  The blades were clearly flattened right smack in the middle: 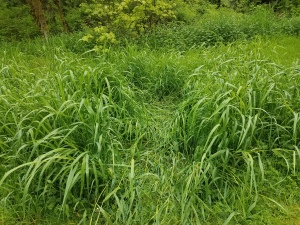 Tonight (Mother’s Day), U2 are here in concert, so James opted to pay tribute to them.  I’m not a big U2 fan, so I’ll pass on playing a U2 song.  I will, however, follow suit with the title. “It’s A Beautiful Day” has helped me pick up my step during many a long run… and it’s Michael Bublé. It just doesn’t get any better than that.

Hoping all y’all have a happy week!!