Actually, I’m not fond of this number at all.

At The Last Supper, there were 13 people around the table… the 13th supposedly being Judas who betrayed Christ.

On Friday the 13th, in October 1307, Philip IV of France arrested hundreds of the Knights Templar, then tortured and murdered them (they protected Christian pilgrims during the Crusades).

In a tarot card deck, XIII is the card of Death.

The Apollo 13 lunar mission was a “successful failure” (successful because no one died).

My baby boy just turned 13!!  I am now officially the mother of a teenager (may the Good Lord have mercy on my soul)! 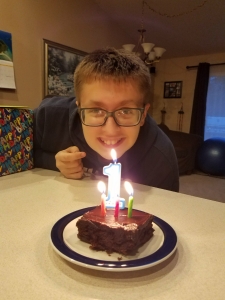 I’m still not fond of the number 13… but I think I can live with it for a year.

Disclaimer: I received a pair of OOFOS sandals to review as part of being a BibRave Pro. Learn more about becoming a BibRave Pro (ambassador), and check out BibRave.com to review, find, and write race reviews! All opinions are my own.

In the spring of 2016, I suffered from a bout of plantar fasciitis with some added morning heel pain.  It was a very hard year to get through, with 9 races scheduled.  I remember Rock ‘N’ Roll Seattle being a very painful race to finish.  I stood in the corrals for about an hour before I crossed the start line and I was already sweating bullets from the pain in my feet.

After months of Arnica therapy (thanks Rob!) and heat and ice treatment on my feet and Achilles, I got the PF under control.  However, I still suffered a bit from heel pain first thing in the morning.  Enter OOFOS recovery sandal!  Admittedly, I felt the oo the minute I slipped these on.  Heaven sent, and I’m not kidding.  I then put them on first thing the next morning, and holy wow!  No heel pain whatsoever!

Feeling the OO after a Seahawks pedicure!

Also, with every Project Pink shoe that is sold, $10 will go to breast cancer research. 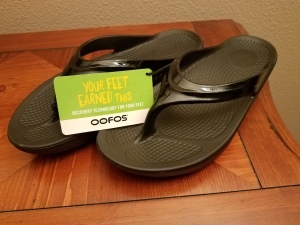 I love this shoe.  My feet feel fantastic after wearing them for a couple of weeks, and they’re especially amazing after a workout.  They’ve passed the rain test… no slipping or sliding.  I now wear two types of shoes… my trainers and my OOFOS.  I feel everyone, runner or not, would benefit from wearing these sandals.  And that is my honest personal opinion.

Still in doubt?  Go check out these reviews from my BRP friends.  If I haven’t convinced you, they just might!  Mai; Meredith; Jenna; Vanessa; Laura; Emily.

Focus in life has taken a slight shift as of late.  Here… let me break it on down for you.

Just a refresher… in early September, it was discovered that James had a herniated disk.  Because of this, most of our long-distance travel plans and races were cancelled, as well as some local.  In the meantime, the most important thing going on right now is James healing. 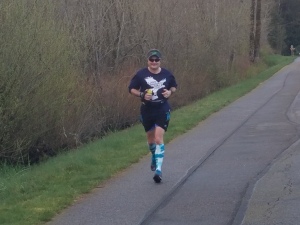 Have you ever lived with a runner/active person who is completely incapacitated?  Not only is there the physical pain to deal with, there’s the depression associated with not being able to be active.  He can’t bend, twist, push, pull, lift anything more than 5 pounds, stand for long periods, or even walk without pain.  And he is not a happy camper.

It’s not been an easy road, especially for James.  His new “normal” is horrible pain if he’s not in a neutral spine position.  He underwent an MRI so that he could get an epidural injection for pain relief and had the injection about 10 days ago.  The injection was supposed to help him start more aggressive physical therapy so that he could begin his healing journey.  The verdict is still out on whether or not it has helped.  We don’t know if James is going to need surgery or not, but we do know if the pain doesn’t ease up soon, the option of a diskectomy at the new year will be discussed.

Hence, I’ve joined a gym to get me the hell out of the house (#kiddingnotkidding).

Actually, as Fall has arrived, and with it rain and 35-degree (F) temps in the morning, I’m enjoying having a change of scenery with the gym and a change-up in routine.  And they have the nicest treadmills on which to run.  As an experiment, I got on the elliptical and realized just how out of shape my non-running muscles truly are, so I believe I got back into the gym just in the nick of time. 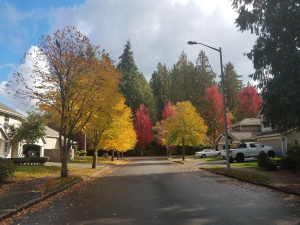 Which brings me to why I haven’t been as active on WordPress or social media as I am normally.  I’m in the process of finding the proper balance of a new routine, so forgive me if I’ve been lame and neglectful.

I’m also in the process of testing some Oofos recovery sandals and it just so happens I have a brand new pair to give away.  Are you female and wear a size 9? Do you like flip flops? Do you like the color black? Do you like walking on clouds? Contact me at neveradullbling@gmail.com.  You don’t need to be a runner to enjoy these!

By the way, Marine Corps Marathon is this weekend… heavy sigh from both of us.  But definitely something to look forward to next year…

NOTE:  As of 8 a.m. Pacific, the Oofos have been snatched up.  Yayyyy Donna!  Thank you for contacting me and being such a great supporter and friend!

As you may remember, I ran the North County Wine Run Half Marathon last weekend in Battle Ground, WA.  Battle Ground is a sweet little town in the midst of Clark County situated near the Washington-Oregon border.  It boasts 3 wineries and, yes, I ran through every single one of them.  We’re big geography geeks, so for those of you who are also GG, here’s a visual: 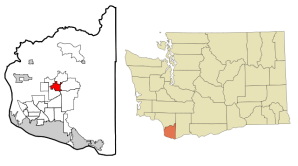 While this was my first official “BibRave Pro” race, I did pay for my entry.

I was extremely nervous about this race for some reason.  Maybe because it was an “open course” (meaning running in the midst of traffic), maybe it was because there were less than 200 people signed up.  Because of the nerves, I was unable to eat anything before the race.  I couldn’t even force down a couple of Belvita biscuits which is my normal pre-race breakfast.  Bad, huge, terrible mistake.

The horn blew and we were off, starting with a nice uphill climb.  No worries.  I got this.  What goes up, must come down.  I was still going along nicely amongst the farm land when we hit the first aid station at about 2.5 or 3 miles.  I took a shot of Gatorade as I hadn’t eaten anything and thought it would help me.  Mistake #2.  I’ve discovered I can’t eat or drink anything with sugar in it while I’m running unless it’s a quick-dissolve glucose tablet, which I actually had with me.  I did eventually end up with a tummyache.  *facepalm 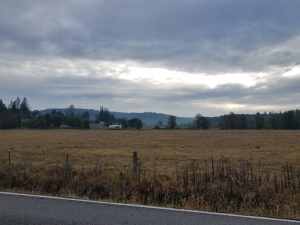 Still going along nicely until about mile 7.  Miles 5 to 7 were all uphill, and by the time I reached the top of the hill, I was out of gas.  Normal story for me… no hill training which, on top of no fuel, equals the biggest breakdown I’ve ever had with tears and a near full-blown asthma attack.  I recovered my breath after about a mile.  Thankfully a fellow Half Fanatic was behind me who eventually caught up to me at mile 11 and she pulled me across the finish line.  Yay!  I finished!  I was so very grateful to see James there and thankful for all the wonderful support he provided me.  I know it was hard for him to have to sit this one out.

Let me break down the details of the event for you…

PACKET PICKUP:  Short and sweet and organized.  It took all of 5 minutes.

PARKING AND TRANSPORTATION:  We parked at a school and shuttle buses took us to the race start line which was at a winery.  There was no parking at the winery, but the buses were on point.

THE COURSE:  It was open and you ran facing traffic on busy rural roads.  This was the one downfall with the race.  Drivers could care less about your safety as they showed time and time again.  Cones had been knocked down that were marking the course, and there were zero policemen around to keep things in line.  Extremely unnerving.  Following is another visual.  The course was the white line to the cone.  For 13.1 miles.  The side of the road was a ditch.

And it was extremely hilly.  You’d think I would have learned from the Olympic Discovery Half to integrate some hills into my plan, but no.  It’s hard to teach an old dog new tricks.  Here’s the elevation profile for NCWR.

PEOPLE:  Super friendly and helpful.  Everyone was extremely nice at this race, great aura.

AID STATIONS:  There were 3, two of which were running through different wineries where they offered water, Gatorade, and shots of wine for those who wished to partake.  I chose not to and stuck with water.

POST-RACE PARTY:  Great pasta and bread to be coupled with some wine tasting.  When I was through with the race, I was so sick and nauseous I couldn’t even think about eating.  After about 30 minutes, I forced myself to have about 5 bites of the pasta, the first food I’d had all day.

THE BLING:  Lovely.  A fully-weighted bottle stop.  I could actually cut the ribbon off and use this. 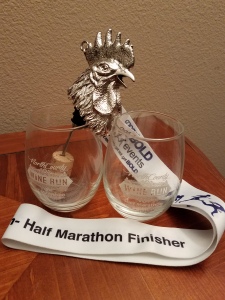 OVERALL IMPRESSION:  Other than the course being amongst tons of crazy traffic, this race was well run, well organized, and well directed.  If they ever closed the course, I would consider going back to run this race again for the challenge alone, to redeem myself and to have a better race.

By the way… after my shower and nap, I was feeling my normal self again, well enough for mine and James’s traditional post-race celebration.  For the first time ever, I had fried Brussels sprouts topped with bacon… I highly suggest you try them.  They were da bomb! 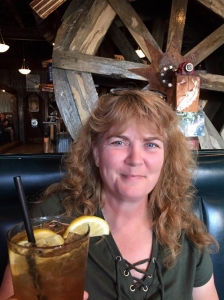