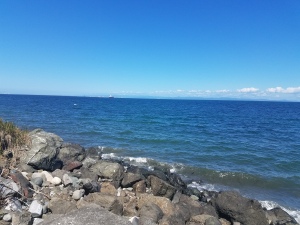 As some of you may know by now, James wasn’t able to run this marathon Sunday (June 4).  If you’re perplexed, you can read about his unfortunate outcome/circumstances here, which means I was on my own. As history dictates, James usually passes me during these events, so I missed him greatly on the course.

That being said, virtually he was with me the whole way.  He was a great cheerleader… even if I did stop talking to him during mile 10 (details to come, 😀 )

Pre-race, he got me super close to the start line, dropped me off 1/2-mile away.  Definitely much better than a shuttle bus, and I needed a warm-up, so I jogged to the field where the race started.  I immediately went to the portaloo line.  Pretty standard in that line… not enough potties, and by the time I reached them, the Star-Bangled Banner was being played.  Then it became a race all in itself to get to the start line. 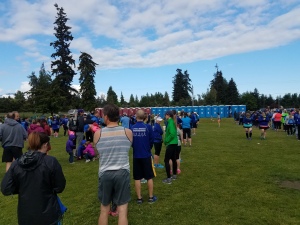 The gun sounded, and all went well until 5K, never mind the powerful head wind.

I texted James at 5K and informed him I just ran into an evil hill.  I said some mighty nasty words… then I soon realized that mile 3 to 4 was all uphill, which is about when I also realized that this was actually a trail race and not just a road race.  Huge difference.  I didn’t train for a trail race, and I didn’t train on hills, especially the gut-wrenching hills I was running up.  I thought I was just going to run a nice trail/pathway next to the ocean… but noooo… that wasn’t the case.  My bad.

Eventually I texted James and asked when my pain was going to end.  He did a quick reconnaissance and informed me I was in hill hell until after mile 8.  Awesome.

Shortly after mile 8, maybe mile 9 (I’ve lost my senses at this point, so I can’t remember), it became a nice downhill path.  I was so relieved.  Down I went… until the shift at mile 10.  All uphill.  I was spent.  I texted James and said, “Not going to make my time.  5K left. Head wind. Gassed.  Still going.” 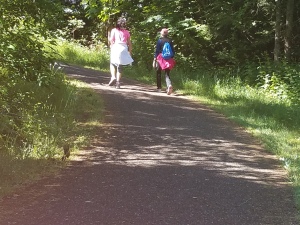 Despite the course “description” on the website of being flat, the last 3 miles were a painful and gradual uphill climb.  I kept saying to myself, “Okay, once I get past this hill, I’ll take off again and redeem myself.”  It never happened because the hill never ended. 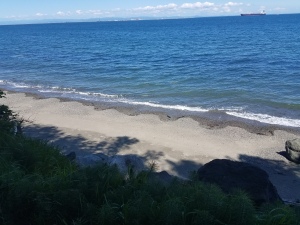 I was very thankful to see James at about 12.75 miles as he ran a little bit with me to keep me going, at least until we reached the finisher’s chute, and then the crowd cheered me in across the finish line.  Such great support for an extremely challenging course.

The bottom line…  beautiful scenery, beautiful people, really hard course.  But I finished.  At the end of the day, I clocked in over 15 miles/24 km (over 32,000 steps on the FitBit).

As for the The Whole 30 having an effect… I believe it helped.  I still felt strong and ready to go, even after miles 8 and 9… it was only after the mile 10 hill that I had a bit of an emotional breakdown and just couldn’t handle any more hills. 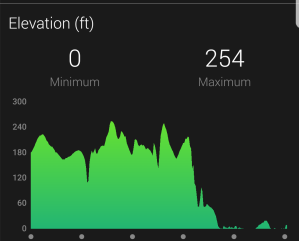 The elevation profile. The drop from 220 to 0 was at about mile 8 or 9. The tiny (but huge) bump towards the end left me deflated.

It was a great day, a great race, and quite frankly, it was my own “un”doing by not training properly for an extremely hilly course.  If you ever run this race… do 10 to 20 miles on a mountain trail for training (numerous times), and you’ll be fully prepared.

Now on to enjoy the beautiful town and area of Port Angeles…  I think there was talk of a hike up to Hurricane Ridge tomorrow, or something stupid like that… 😀 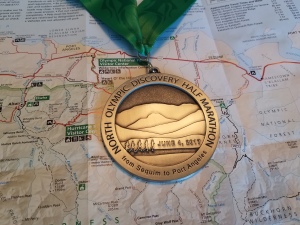 From Sequim to Port Angeles