Focus in life has taken a slight shift as of late.  Here… let me break it on down for you.

Just a refresher… in early September, it was discovered that James had a herniated disk.  Because of this, most of our long-distance travel plans and races were cancelled, as well as some local.  In the meantime, the most important thing going on right now is James healing.

Have you ever lived with a runner/active person who is completely incapacitated?  Not only is there the physical pain to deal with, there’s the depression associated with not being able to be active.  He can’t bend, twist, push, pull, lift anything more than 5 pounds, stand for long periods, or even walk without pain.  And he is not a happy camper.

It’s not been an easy road, especially for James.  His new “normal” is horrible pain if he’s not in a neutral spine position.  He underwent an MRI so that he could get an epidural injection for pain relief and had the injection about 10 days ago.  The injection was supposed to help him start more aggressive physical therapy so that he could begin his healing journey.  The verdict is still out on whether or not it has helped.  We don’t know if James is going to need surgery or not, but we do know if the pain doesn’t ease up soon, the option of a diskectomy at the new year will be discussed.

Hence, I’ve joined a gym to get me the hell out of the house (#kiddingnotkidding).

Actually, as Fall has arrived, and with it rain and 35-degree (F) temps in the morning, I’m enjoying having a change of scenery with the gym and a change-up in routine.  And they have the nicest treadmills on which to run.  As an experiment, I got on the elliptical and realized just how out of shape my non-running muscles truly are, so I believe I got back into the gym just in the nick of time.

Which brings me to why I haven’t been as active on WordPress or social media as I am normally.  I’m in the process of finding the proper balance of a new routine, so forgive me if I’ve been lame and neglectful.

I’m also in the process of testing some Oofos recovery sandals and it just so happens I have a brand new pair to give away.  Are you female and wear a size 9? Do you like flip flops? Do you like the color black? Do you like walking on clouds? Contact me at neveradullbling@gmail.com.  You don’t need to be a runner to enjoy these!

By the way, Marine Corps Marathon is this weekend… heavy sigh from both of us.  But definitely something to look forward to next year…

NOTE:  As of 8 a.m. Pacific, the Oofos have been snatched up.  Yayyyy Donna!  Thank you for contacting me and being such a great supporter and friend!

Clever title, eh?  It’s taken from Song of the Witches/Macbeth, written (of course) by William Shakespeare… you know… trivia.

This is a post I’ve put off writing for about a week now as I have slowly come to grips with the reality of the situation.  However, if you follow both me and my husband James at 50 in 50 Marathon Quest, then you know what I’m about to say.

We won’t be going to DC next month to run Marine Corps Marathon, which was to be my very first marathon.  We had to defer our entries to next year.

Last week it was discovered that James may have blown a disk.  Today was his appointment with the spine physiatrist who confirmed that James does indeed have a herniated disk with a trapped nerve.  James will be getting conservative treatment with physical therapy to see if that helps before he goes all out with injections into the back. 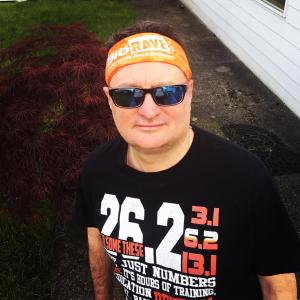 This is not a running injury, so please don’t even go there.

This puts an end to James’s race season before it even begins.  It throws me a little off track as well, and we are very saddened by these recent developments.  However… my family does not wallow in self pity.  We adapt and improvise and get the hell over it.

So!  New plan people!!  I will continue on with my training and racing as scheduled, all except for MCM.  I have now chosen to run Rock N Roll San Antonio as a full marathon in December.  We are hoping that James will be well enough by then that he can at least participate in some way, but if not, he and AJ will be there to cheer me across the finish line!

And fear not!  It’s not all been doom and gloom here in the hot and dry Pacific Northwest!  AJ and I attended the PAX Conference in Seattle on Labor Day.  For those who don’t know, it’s a huge game convention.  As AJ has known since he was 8 that he wants to be a game designer when he grows up, we encourage all development in that aspect, so we were off to the convention.  What a great day it was.

We got to watch the Mario Super Smash Brothers Tournament while it was being streamed live on Twitch.  These kids were playing for a $10,000 purse:

And we even ran into Jack Septic Eye, a famous gaming YouTuber, of whom I once wrote about here:

And I completely understand that I may be speaking Greek to everyone over 20 in regards to gaming, but when it’s your child’s passion, you try to keep up.  KnowwhatImeanVern?  Okay, yes, confession time… if you didn’t already know it, James and I are gamers too.  I’m in the middle of re-playing the Kingdom Hearts series before the new one is released in December and James just started a new Final Fantasy.

Anyway, my friends, onward I go with my running, with high hopes for a speedy recovery for Jamesy!  I will race the Sounders 5K this Saturday, the North County Wine Run Half-Marathon the following week, then it’s on to San Antonio in December!  Woo hoo!