I had run a 10K back in 10/2013, and it was then I decided I would start training for a half marathon.  I was aiming for the Lake Sammamish Half for March, but after a little discussion with The Motivator, we decided my first half should be Rock ‘N’ Roll Seattle, 6/21/2014.

A month before RNR Seattle, we ran RNR Portland, with me running the 10K and James the half.  I remember during that race watching all the people make the turnoff to continue on with the half and thinking, “Oh how the hell am I going to pull this off in Seattle.  I’m already knackered.  I can’t imagine running another 6 miles.”

Pre-Seattle race, I remember being a basket case.  The nerves were out of this world.  And the RNR events are huge, so the amount of people that were there freaked me out as well.  But everyone else looked so calm.  Thankfully James stayed with me for as long as he could so I wouldn’t bail (lol, kidding).

It probably took me about 5 miles in before I relaxed.

The course was gorgeous (and super hilly), and I felt privileged to be able to run in areas I wouldn’t normally get to see.  Back then I didn’t carry my phone with me, just my iPod for music.  So, no pictures.  I made a mental note to carry a camera with me on the next race.  This was before blogging, so that didn’t happen.  There are a lot of races I missed out on taking pictures, and I’ve seen some amazing sights.  It’s also one of the reasons why I’m running the 50 states… for the sights.  Everyone else chases PRs… I’m there for aesthetics, lol.

And I’ll never forget the feeling of accomplishment I had when I finally crossed the finish line.  There is nothing that compares to it.  It’s why I’m addicted to racing… and, oh yeah, the bling.

I have since run 10 more half marathons and am now training for my first full.  I can imagine the above feelings are going to be escalated out of the stratosphere.

“I can do all things through Christ who strengthens me.” – Philippians 4:13

And something super cool… James made the promo video for RNR Seattle.  He’s at about the 20 second mark flashing his rave green Seahawks shirt.

Have a great rest of your week!!

It wasn’t pretty and it wasn’t fun, but yes, I finished.  One of the best ways to see a city is to run a race through it.  I got some great shots of Seattle… shots I wouldn’t otherwise be able to get. Here is my day in pictures. 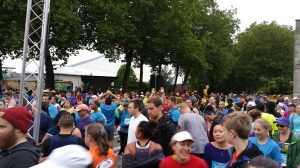 This is at the start. So many people, it took me over an hour to cross the starting mat once the first corral had gone. James hit the 5K mark before I even started. 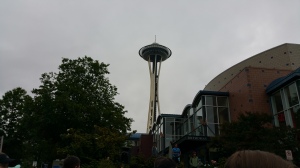 We started at the Space Needle/Seattle Center.

Alaskan Way Viaduct… can you see the wall to wall people? 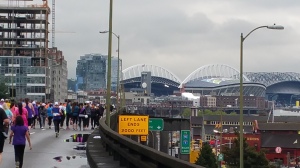 So majestic to see both stadiums… and knowing that is where the finish line is… so close yet so far away.

A nice shot of the Columbia Center. Remember I was recently at the top of that building?

The huge ferris wheel on the waterfront. Another landmark. 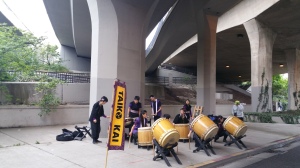 I love it when drum lines play on the course. 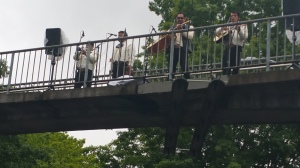 Mariachis serenading us from above. I was starving at this point and was ready for my Mexican food.

A group of pirates cheering us on and handing out water, mile 7.

This guy is always here at this particular point during the race, right next to Genesee Park heading to Lake Washington Blvd. 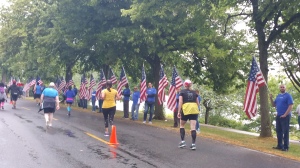 Close to 1/2-mile lined with American Flags, right after the memory mile, mile 9. 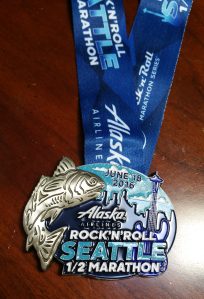 I ended up logging over 18 miles that day (love the worthless stats).  Next up, Missoula Marathon and Half on July 10th.

Happy Father’s Day to all the wonderful dads out there and especially to my husband James over at 50 in 50 Marathon Quest!  May you all have a beautiful day!

It’s time once again for Motivational Music Monday!  Anyone can contribute, so go check out James at 50 in 50 Marathon Quest and add a song and/or link in the comments!

This coming Saturday is

I’m doing the half & James is doing the full (may heaven help him on all those hills)!

And I couldn’t think of a more appropriate song for this coming week!

For everyone rockin’ it this weekend, we salute you!

Happy Monday!  May you have a blessed week!